You are here: Home / History

The derivation of the name Ryhall comes from a halh, a piece of land in the bend of a river, where rye is grown. The River Gwash is a tributary of the River Welland rising near Knossington , west of Oakham. Flooding was a regular occurrence in the village before the creation of Rutland Water in 1972. The River Gwash is also fed by springs which has provided a reliable source of water for centuries. Water power on the fast flowing stream was used by the Mill which stood at the junction of Mill Street and Essendine Road until the 1920’s. It was demolished in the early 1950’s.

Although a large number of cottages have been pulled down, a number of Grade 2 Listed buildings remain. In 1591, Sir William Bodenham built an Elizabethan house on the south side of the church. This is the same site as a Hall house built by the Nettleham family earlier. The present Hall is Georgian and was reconstructed from the original Elizabethan house by Michael Pierrepont in 1800. It was he who gave the land on which was built the National School in 1857. The school was closed in 1963 and the building was converted into the Village Hall. 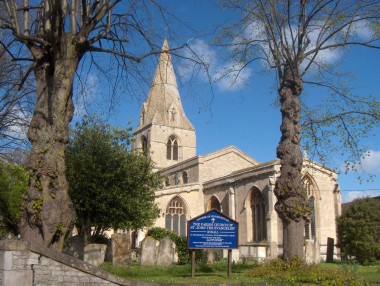 Church Farm, a Grade 2 listed building lies to the north of the church and stands against the churchyard boundary. The house and farmyard almost certainly stand upon the site of the Manor House of Hugh Despenser built around 1250 at the same time as the Church was being built. On the chimney are the initials and date ‘ J W E 1685 ‘ The initials are those of John Wallett and his wife Elizabeth who owned the estate at the time. Altogether it is a very large site incorporating the back part of Fordham’s kitchens Ltd, originally Church Farm barn and stables. The arched cellar in the Green Dragon Inn is all that is left of the original building. A tunnel is thought to run from Ryhall Hall to Manor Farm ( now Hemgate House) also from the Hall to a vaulted cellar in the Green Dragon Inn.

Directly opposite the Green Dragon Inn, is a Queen Anne house ( 1702 – 17-14) one of the oldest houses in Ryhall. Originally it was the Five Bells Inn possibly a reference to the five bells in the church. Thatch has been removed and the roof raised. The Five Bells Inn closed in 1914, one of the five pubs in the village now closed. 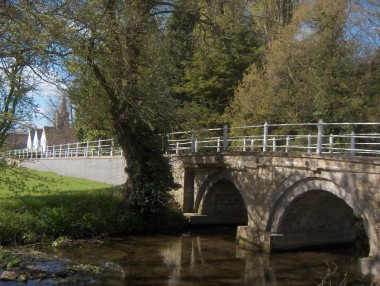 Bridge House is a Long house and originally it was a bakehouse to the right-hand end and an Inn –  The Wheatsheaf – at the other end. The date of this house is shown on the front wall as 1791. In the 1920’s the Wheatsheaf Quoits team played in what is now the orchard behind the house.

Taken from a local history written by the late Michael Whetstone, head teacher at Ryhall Primary School from 1968 to 1994.

To find out more about the current Parish Councillors Click Here.

Following the meeting on the 7th of December, at Ryhall Village Hall; below is a list of details of people you need to contact AS MANY INDIVIDUALS BY THE 16TH OF DECEMBER Please … END_OF_DOCUMENT_TOKEN_TO_BE_REPLACED

Concern has frequently been expressed about speeding in the village, most recently by the School Ambassadors. A proposal to create a 20-mph zone in the centre of the village was discussed and … END_OF_DOCUMENT_TOKEN_TO_BE_REPLACED

Rutland residents have helped to create a new Shared Vision for the future of our country - a Vision with long-term goals based on the things that are most important to local people. Read and … END_OF_DOCUMENT_TOKEN_TO_BE_REPLACED